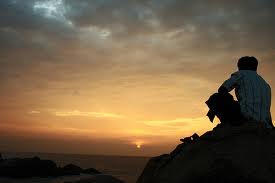 The first song ends, the upbeat and fun rendition of David Crowder’s “My Beloved” gives way to the slow and passionate “Restoration” by David Brymer, I have been practicing these songs for weeks, preparing for this chapel service, The band had practiced Monday night, we were excited, the guitars were turned, the Lord had called us to lead his people in Worship, but I had started having some trouble, I almost didn’t start the song, the feelings that had been rolling over me all day wanted now to crush me, on stage, during worship, in front of everyone.

I started the song, the opening words making it a little easier to gain some momentum. We were going to be alright, I was going to get through this. But God was overwhelming me and I could not run from it, I had no choice but to embrace it. My mind cherished every word, my heart languishing the thought of God as restorer. Gratitude and praise for God’s own restoration caused my throat to crack and my heart to soar. I was not in sorrow, just overwhelmed by God’s goodness.

Flashback to a year ago, it’s about 10:45 in the morning, February 11th, 2015, it was a Wednesday. I am going about my normal routine that was my nearly 120 hour work week (Between the Church and the College), unloading leaves from the leaf vacumn by the Administration building at Sterling College. I had maybe an hour of sleep the day before, and was not feeling all that well. I step out of the back of the truck and start down the ladder, my next memory is feeling the pain in my neck and head and then a friend asking me if I was okay. Then the hustle and bustle of students coming back from Chapel and someone praying over me, the Concussion test given by the Police Officer and then an ambulance ride to the Hospital in Lyons.

“You have a minor neck sprain and a Traumatic Brain Injury” the doctor told me after I had been scanned and put through the battery of tests. You will not be able to go to work for the next few days, and only then you will be able to go back when your doctor clears it and only for a short time.” My doctor did clear it, and a week later I was going back to work on a limited basis. But the story was not over, I found quickly that I was unable to do most things without a throbbing headache. This was complicated by the fact that my emotions were extremely sporadic. I was living on an emotional Pndelum, a time bomb waiting to explode. Things went from bad to worse when late one Sunday I started having suicidal thoughts, my friends and spiritual family and my girlfriend at the time gathered in my living room and stayed with me until the feelings subsided. Thought the next morning they came back with a vengeance. I called my boss, called the school counselor and a professor, knowing that this was not my usual state, and we prayed and the plan was made to send me to my grandparents farm for a week. I went and had a wonderful time, both with the Lord and with my family.

When I returned though, the healing was not finished, I still had a long way to go. I saw a Neurologist who diagnosed me with “Post-Concussion Syndrome” and I was told to stay home from work until I was completely healed. That meant 2 months of spending time at the house, times when the only relief I could get was playing music or preparing for my sermons. During that time a lot of things happened, my relationship crumbled as we decided it was better to save our friendship than try to save the relationship, my relationship with God was more a wrestling match for the first month and in a time of growth the second. I was in a place where I had to rely on God for everything from day-to-day emotional stability to the ability to pay rent. TO relief from the headaches that plagued me all the way up to June (after I had gone back to work). I cut my hours back at work to 30 (when I would be able to go back) and it was during this time that God called me to Gordon-Conwell Theological Seminary. I also renewed my Lectio Divino during that time, knowing that days of deep scripture meditation were required.

We closed 10:31, I started packing and on August 15th my mother and I headed for Ohio where I would be spending three weeks before coming to Boston in mid-September to begin this new chapter of life.

Upon reflecting back on this year there are a number of things that I can say with great confidence again God, He provides, He is good, He is faithful, He is Sovereign but most importantly He restores.  He restores us to Himself when we have run away, He restores us to health if it is needed, He restores our friendships, He restores us to community, He is a God who restores us. At the end of the year I have dubbed my personal “Theodicy.” Where all I had left was God, where I faced down the storm and in the midst of suffering I got God as my only answer, He restored me.

Yes, it is true that most of that restoration had nothing to do with Sterling, though He did restore those friendships that were so hindered by what happened that some even fell apart. It is true that I had to move to a different part of the country, make new friends and live in a new place, get involved in a new community. At first that was difficult, at first I hid my gifts and abilities, not wanting to use them for their intended purpose of building up he flock. But after a time, God drew me out and then thrust me into the community.

“I feel good” I had told one of my brothers on Monday while we practiced for Worship today. “For the first time in a long time I feel alive.” His response: “That sounds like freedom.”  I had been to the depths of the valley, spent time in the wilderness and God had brought me back to the mountaintop to praise His name and to lead others to praise His name. Just as He has done my entire life, from the night I was saved, to that night with the grace killers where my faith was destroyed, to those in Sterling who helped me pick up the pieces, on that Mountainside where God met me in the Labyrinth, to those men and women at Christ’s Body and on the streets in Denver. To the call to be a pastor and the call to my first Church in Stafford. God had been walking with me, through all the abuse at the hands of the church, to the bullying growing up to my own shortsightedness and lack of self-care that led to the fall last year. God was working to restore me to Himself. He has taken all those years of pain and shame and replaced it with Joy. Brought into His constant presence and renewed my mind and my heart. He has grown in my a deep, and ever deepening, love for the Church and His people. One day we will experience the ultimate restoration when we spend eternity with Him in heaven.

I share this with you for the sake of Christian Love, that you might know what God has done and rejoice with me in His great work. But also to encourage you that when your life seems permanently fixed in the valley, when God seems far off or when you are wondering why you are suffering, to remind you that God is there, an ever present force and gentle whisper. He has not forsaken you, He has not left you for dead. He is working on you, preparing you for a new season on life and great joy. He will restore you in His good timing for His steadfast love for you endures forever, and cannot be taken away.

Ceasing to Be Christian: A Brief, Critical Look at the Theology of Joshua Feuerstien
Jonathan Takes Five: Talks Arts, the Church and Seminary Life.