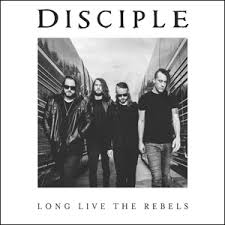 It has been a little while since I wrote a review (since I left Altrocklive.com in 2013) but maybe it is time to dust off those critical skills and write a review and what a better album to do that with then Disciple’s latest album Long Live the Rebels.

Few bands have been able to stay relevant over a 24 year career. Some do not even last that long, stopping at 15 or 20 if they are lucky. However, since 1992 Disciple has been rocking our hearts and encouraging our relationships with Christ. First introduced to them by their 2005 breakout hit “The Wait is Over” and instantly hooked by their lyrics and passion for the message of Christian Faith that is intricately woven into every song the band fronted by talented vocalist Kevin Young quickly became one of my favorites. The band has helped me through many a dark time in my life and my only way to really thank them has been to review their music (this is my fourth Disciple review). In a way, I grew up with Disciple, having been born in 1991, a year before they were founded.

With that background I hold the band to a very high standard both musically and lyrically. Fans have come to expect a lot from the band that wants to be “Unapologetically Christian.” For fans who are used to that approach to songwriting from the band they will not be disappointed. If fans were concerned the band might be slowing down after 24 years, they will not be disappointed at all. If anything their previous record, the independent outing, Attack should have been a warning, the band was only going to get heavier. I suppose working with producer Aaron Sprinkle and Tooth & Nail should have been a sign to all of us too about what was coming from the band that has left no stone un-turned when it comes to rock and roll.

Yes, Disciple has gotten heavier, though there are no tracks like “The Name” from Attack which may be the heaviest song Disciples ever produced. The album has a consistency to it that Attack did not. Every song until the albums closer “Empty Grave” boasts heavy guitars and unique rifts allowing Disciple to avoid sounding like themselves and keeping this record unique. The inclusion of a second vocalist, guitar player Joseph Prince (“Erase”, “Not today), adds a nice contrast to Young’s soaring vocals and passionate screams. If you think the album is totally unique think again, there are pieces that will remind people of previous record. For example the synthesizer that stars the lead of track “First Love” will remind the listener of the opening track from Horseshoes and Handgernades the rifts on “Come my Way” will remind the listener of tracks from Southern Hospitality and the arrangement of the hard-rocker anthem “Underdog Fight Song” will take the listener back to By God or Disciple. These similarities are welcome and even refreshing as they create a feeling of Nostalgia and the listener does not feel as if he/she is listening to carbon copies of those two albums.

Lyrically the album will remind listeners of O’ God Save Us and Horseshoes and Handgernades. Breaking from the more worship focused lyrics found on their previous outing the band focuses more on the struggles we face in everyday life and God’s grace, love and compassion for His saints. Songs meant more to minister and encourage the listener rather than bring the listener to a place of worship. “Come my Way” deals with the call of temptation and darkness and the desire to give in but also with the strength of God to overcome those temptations and say no to that desire to sin. The Album Opener “First Love” is about falling away from God and confessing that sin and being restored to God. The artist wrestles with not having a word to describe what he has become before God in his sin but wanting to come back to his first love. “Black Hole” talks about the effect of sin on the human heart. Written from the prospective of God the song shows the immeasurable grace of God towards those who are hurting and suffering. Young uses Crucifixion language on the bridge to tie the song together, a beautiful reminder of grace and truth in the middle of a darkened world. The song “Erase” deals specifically with mistakes we make and God’s desire to bring healing into our lives; “When you say you’re not okay, my heart it breaks to heal your pain, I will erase your yesterday, you’ll be okay, My love is greater than your mistake.” Finally the album sums up all these themes in the song “Empty Grave” which stands out not only because of the different instrumentation but because of the writers amazing insight into the power of salvation by God. Taking us from the death of sin to the life in Christ, filling us merely because He is alive and has brought us back to life, the song is, a beautiful putting forward of the Gospel Message.

After 24 years it is clear from Long Live the Rebels that Disciple is far from slowing down. The band continue to produce absolutely incredible music that ministers to the heart of the hurting and broken. Showing them that the love of God can reach them in their deepest pain and bring them to new life in Christ, there is no place God cannot reach us, nothing we can do that can separate us from Him. That has been the message throughout Disciples long career and their latest album only reinforces that message of deep faith.

In short, if you do not have this record yet, go out and get it, it is worth the buy.

God’s Heart Announcement!
When Love Bursts Forth: A letter