Racism Exists-So let’s talk about it. 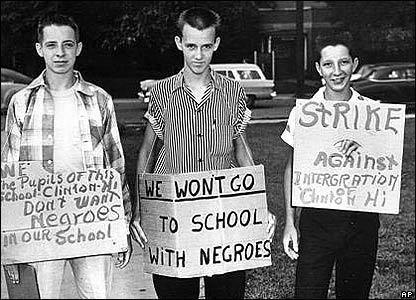 I can very distinctly remember the first time I ever heard a racist slur aimed at someone of color. It was a co-worker at a catering company I worked for in college and something felt very wrong about the slur and though the man who was the target of the term laughed it off, you could see the hurt in his eyes. I grew up in a rural area where I heard a lot of negative comments, but I do not remember hearing a lot of racist remarks so the remark made towards my co-worker was a bit jarring. Not that things like what I witnessed did not happen where I grew up, but I was never really party to it nor was I as sensitive to it as I had my own set of derogatory terms leveled at me because of my disability.

It seems hard for us to accept but, yes, racism exists and it is as ugly and as harmful as ever. It exists in the sinful hearts of men and it exists in the economic and political systems and even in police forces. It exists in our sinful hearts and is carried out in the sinful systems we create. Oh, and it exists in the church too. Before you think I have gone off the deep end hear me out, because I know my audience and I am well aware where some of you stand. No, I do not see racism everywhere, but I do see in certain places in certain attitudes racism seems as necessary (for some) as eating. I have known people who could not let go of their hatred for others, especially those of other races. I have seen on national television NFL fans booing and spewing hate filled tirades at players for kneeling. Seen the Facebook posts of people I graduated High School with condemning the football players and sharing memes that shame and make fun of Collin Kaepernick. Yes, racism exists, in some places it is outright and blatant, in some places it has been talked about and acknowledged and the healing has begun. In some places it is subtle and continues in sinister comments and epitaphs and statues of former presidents being lynched.

The problem is, we do not want to acknowledge it, or we want to brush it off and say things like: “Oh I am colorblind” or “things are so much better than they used to be.” And in some ways they are, but in some ways they are much worse than they used to be, and though we do not like to confess or own up to that, we have allowed it to rise all the way to the upper tiers of our government and shunned rappers for speaking out against it. We tell Black Lives Matter to go home and continue to pass around false narratives without seeking to dig to find the truth.

By the way, Racism is not limited to black and white or white and black. It can be Korean to Black, Black to Korean, you name an ethnic group and there are likely examples of racism. It is a problem that affects everyone, there is no such thing as reversed racism, we are, as Dr. Emmitt Price III says: “All socialized in different ways and some are socialized to hate.”

My goal here is not this, my goal here is not to heap shame or guilt on anyone for being in whatever station or whatever ethnicity you were born with. Your skin color cannot change and should not be criminalized. Nor do I want to turn the tables and criminalize a group for being an ethnicity or for having a skin color or having a “white” mindset or whatever. My goal here is to challenge the thinking those who live with the mentality that there is nothing wrong, those who want to dismiss racism both personal and systematic. I want to help you think outside of the way you have been socialized so that we can acknowledge the pain of others and move beyond the Us vs Them mentality. Shame and guilt do not help accomplish that, to put behind the normalization on one limited people group so that we can fully come together in the unity of the Spirit while celebrating our infinite diversity. Racism is a problem, but it is not merely “their” problem, it is our problem, both as a church and as a society and we have to recognize that. Racism is a sin, but it is not merely a personal sin, but a corporate sin just as much as infidelity or fill in the blank. Every personal sin is felt by the corporate body, the repercussions of sin are not merely personal, they are felt corporately and sometimes universally.

There is pain and suffering in this world caused by the Church and by the world at large. Now, the secular world does not want our morality, does not want our faith, does not want our truth. But in the Church we have the Gospel and yes, we are to take the Gospel to the world, we are to be visible, but we cannot dictate the truth of the Gospel, the blessings of the Gospel, to a world that does not want it until we have taught them. That’s why in the Church we need to acknowledge and accept that we have perpetuated racism both individually and corporately and denounce it as often as we come across it within our ranks and have the hard conversations required of us to let the Holy Spirit work within us individually and corporately in the work of reconciliation.

The secular world may not want reconciliation, it certainly seems that way, but in the Church we are called to be different, we have the ability to see the Imago Dei in every person by the Holy Spirit. We do not serve a powerless savior, Christ’s death and resurrection is for everyone, even if, like me, you believe in the doctrine of the elect, (we do not know who is part of the elect so we had better preach the Gospel fervently), Christ’s death is for everyone and the Gospel is for everyone. The transforming power of the Gospel can remove us far from issues of ethnicity and divisions over ethnic lines and far from the evils of racism, but it will not do that unless we acknowledge the elephant in the room. Not that God is powerless to transform us, but because He is not going to use force to make us deal with this. He will, and is, stirring in our hearts to bring us to the table, His table, not a white table or whatever, so that we can discuss and heal and through Him, do the work of reconciliation. That is what should happen in the Church, that is what God is calling us and stirring us too. We cannot move forward unless we recognize and seek transformation from what is behind. In the words of a Casting Crowns song: “Jesus is going to change the world, but we can’t chain ourselves to the Gospel, because we are slowing it down.”

We are not mere individuals in the Church, I know that upsets some of our western, post-Enlightenment sensibilities, but we are not mere individuals. We are part of a collective, and like I said, I do not want to talk about guilt because scripture is clear, we are all guilty and fall short of God’s glory (Rom 3:23). God takes away guilt, and together then we are responsible for dealing with the hurts that have been caused by our history. If there is to be reconciliation there has to be acknowledgement of something bigger than and outside of our own limited space or individual pride. We have to let each other in and we have to be let in and guess what? We have already been let in by the Father. If you are a Christian and you have confessed your sins he is truly faithful to forgive our sins and to cleanse us of all unrighteousness (1 John 1:9). The language of scripture is clear, there is no such thing as the lone wolf or solitary Christian, we are a corporate body with corporate responsibility to the Gospel.

Racism exists and it is a sin, a corporate sin, but God can and will redeem us and He is stirring the waters and seeking to do the work that is required for reconciliation. But we must see each other and walk together and let God do the work.