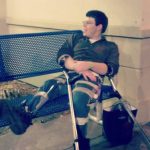 “One who has unreliable friends soon comes to ruin, but there is a friend who sticks closer than a brother.” – Proverbs 18:34

This post is in memory of Chris D. Valdenar, 1990-2020 who passed away on Thursday May 14th due to complications from diabetes.

Where do I start to compose this piece? Just like my original Facebook Post on Friday afternoon after we found out that my long-time friend, 11 years and counting, had died due to complications from Diabetes. How do I even begin to honor a friend who had become a brother, and who became a brother so quickly. But not just to me, to so many, how do I sum up what his life meant, to mark it has left and the legacy it left behind.

Chris and I’s bond was something uniquely formed. I only have one other friend who I know understands the ins and outs of life as a disable adult. These are rare who understand the ins and outs of daily life with a disability. We met when he sat down at dinner one night, our college group was the eclectic group of friends that was basically our campuses island of misfit toys. Some of us fit in everywhere, some of us only fit in our own little group. Some had been dragged from their isolation, from sitting alone, to become not just a group of friends, but a family. Some of us were broken, all of us were broken, and most of us wondered how we had made it where we were. Chris marks the third loss from our group, Tim who we barely got to know before he lost his own fight with diabetes. Jennifer Shannon died on a spring Sunday Morning after a long fight with cystic fibrosis. I was in the middle of the sermon when I got that news. Yesterday I was writing tomorrow’s sermon. It is times like these I am thankful for that group. I think I talked to just about all of them and most of our wider circle of friends, it is good to know we are not mourning our friend alone.

Still, I miss my friend.

I am not entirely sure this has completely set in yet. It seems like yesterday we were driving to Applebee’s for Half-Price apps with two or three carloads. Or he and the group were picking me up from the Hutchinson Train Station at 2AM, or we were driving back from Formal watching the lightning to make sure there were no Tornados coming towards us. I could sit here and list memories for hours on end list memory after memory, story after story and bring in friend after friend to tell you story after story. He was a good friend to so many and many of us are broken-hearted.

Chris was always fun to see whipping around campus in his electric wheelchair or a joy to see come working his way towards you on his crutches. It seems weird to say it that way, but those are the emotions that came to mind. He was one of the many people who made sure I made it to Sunday services when I would do pulpit supply at Salem or Stafford (before I pastored there) and he would always sit in the front row. I believe it was at Hudson when someone asked if Chris, who was two years older than me, was my son. He was rough around the edges, but I never doubted his faith.

So on Sunday, in honor of my brother, I am going to turn on one of his favorite sports and mine and think of all the times we debated over Junior or Senior or Kyle Busch and Jimmie Johnson. Then at some point I am going to Applebee’s for a meal in his honor and I will never, ever forget my friend and brother.

Jonathan David Faulkner is a Graduate of Gordon-Conwell Theological Seminary holding Masters in Divinity and Church History, a Pastor, Musician and Writer. He holds a Bachelor’s Degree in Christian Education & Administration with a concentration in Urban Ministry. He lives with his wife Rachel and daughter Erin in Buffalo Center Iowa and seeks to be a part of the project of reconciliation in the local and international church. He is currently serving as the Pastor of First Congregational Church of Buffalo Center.

Faith, Fear and Reopening Our Churches
The Seven Guiding Values Series Part 1: “A Culture of Believing Prayer and Intercession” 1 Tim. 2:1-5