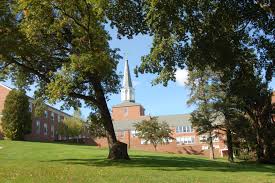 How we respond to Dr. Sunquest’s words, is just as important as that we respond.

To all the Saints and the Children of God at Gordon-Conwell Theological Seminary, grace and peace from God the Father, in the unity of the Spirit, I, Jonathan Faulkner, greet you as your brother and fellow co-laborer for the full gospel of Jesus Christ as we all seek justice, love mercy and walk humbly with God the Father through Jesus Christ our Lord, Amen.

Let me make three things clear at the beginning.

Brothers and Sisters, I am angry too. For the last three years of my time at the seminary I learned to listen and then found my voice in actively engaging the situation we have on our campus. The fact that so many of our brothers and sisters have been hurt by statements made in classrooms and from the President’s Office at Gordon-Conwell is unacceptable for an institution that claims to be training church leaders. How can the pastors produced by Gordon-Conwell be expected to engage in the cultural issues around us, if the upper echelon of leadership is not demonstrating that for us, if there is not example of follow before us, then how are we going to do this in the real world. Dr. Price once told me, during a time when I was wrestling with my families own history and participation in Slavery and the opposition to the Civil Rights Movement that I now had a chance to “Redeem the family name.” Even though E.L. Faulkner (Dupont, Mississippi Prayer) never repented of his sinfulness in this area, I can, and then I go the other way. As with Paul writing to his protégé Timothy in Ephesus so long ago: “The aim of my charge is love, stemming from a clear conscious, a sincere faith and a pure heart” (1 Tim 1:5).

But one of the other things I learned from Dr. Price was that when we travel this road of reconciliation we fail when all we do is change the roles of oppressor and oppressed. Christianity should be the place where those roles are eliminated altogether. The world cannot understand this because the world does not have the Holy Spirit, I have advocated for Christian involvement in these discussions since 2014 for this very reason, but we have to be having them well within our own walls and again, that is something we as Christians have the capacity to do through the power of the indwelling, incarnating, presence of God within us. We cannot go so far the other way that we have actually reversed the harm back to us onto our brothers and sisters. If we do, we have failed to be reconciled to one another.

I do not say this to delegitimize anyone’s anger or frustration, on the contrary, we need to be angry about this, Charles Fick’s piece yesterday needed to be ran. Anger and hurt are justified because as both Charles and I wrote yesterday the language used and the lack of a cultural toolkit were unacceptable and are objects our Brothers and Sisters of Color have been asking us not to use and to build for more than a century. At the very least we can listen to this request and act on it so as not to hurt those whom we lead and teach, and that is only a starting point. However, if our anger and frustration causes us to sin, then we are no better then those who caused the hurt in the first place. There are a few encroaching sins we must avoid.

Again, all the anger and frustration we are feeling is legitimate, as a disable person on campus I experienced a lot of these same things, but no ones experience is a monolith and everyone is experiencing this situation differently. What we do now, how we respond, is as important as responding and if we cannot do this gracefully, if we respond to gracelessness with more gracelessness, we end up with a lot of toothless, blind people. Just think of where we would be if the Savior responded to our gracelessness towards him, with more gracelessness, there would be no drawing, no salvation, no eternal life. God would be justified in that, but He does not. Instead He sends Jesus, His son, to die on the cross for the sins of the world so that we would not be bound to the responses of this world but free to respond as the Holy Spirit responds, with forgiveness and grace.

I would recommend avoiding posting about this on Social Media, especially in a way that is dictated by pure emotion, and not by the word of God. It is okay to Lament, Lament is needed and good, but Social Media is hardly the place for it since it does 1 of two things, either it draws sympathizers and reinforces negative stereotypes about the one we perceive as “other.” It also becomes a place where fighting occurs and more divisions and grievances and hurts get amplified and multiplied. I am not saying we should not speak out on Social Media, but going there for things like Lament or looking for a fight in the name of “educating” our detractors does no good whatsoever.

I have intentionally left out forgiveness until this point, as Dr. Bryan Lorritts says: “You do not have a choice when it comes to forgiving someone, but with reconciliation there is a loophole.” I want you to forgive one another, forgiveness is the beginning of healing for you and opens the door for reconciliation. You cannot be reconciled with someone you have not forgiven and who has not forgiven you. And when someone comes, asking for forgiveness, do not require anything from them but the transformation of the Holy Spirit, allow them to have their journey, do not demand and instant arrival at your point of view, for that does not accomplish anything. While you are waiting for forgiveness, do not break fellowship with one another, that is the worst thing you can do and simply creates echo chambers where your negative perceptions about one another are reinforced, this hinders forgiveness and is graceless.

Finally Brothers and Siters, I appeal to love, not human love, but Christ’s Love, the Love you have for one another in Christ Jesus. This Love is poured out for you in prayers, in supplications, in acts of service, in this post. If we cannot engage one another respectfully and lovingly then the hurts and pains and struggles will only deepen and we will lose Gordon-Conwell completely. If Love does not drive our actions, then we have already lost, love for God, love for One Another. There is no Jew or Greek, Slave or Free, Scythian or Barbarian, we are all one in Christ Jesus bringing the uniqueness of the cultures God created and placed us in to the throne room where they are transformed not into a mono-culture, but their truest forms, what God intended them to be and we can all celebrate with one another, even where we are different. The love of God does this, may we be as much like the multitude in Revelation as we can. Our response must be well-seasoned and the only seasoning that matters is the Love of God, all other seasons and spices are included in that one action, the Love of God.

Peace be with you and with all the saints, the saints in North Iowa greet you.

To Christ be glory forever and ever amen.

A Student’s Response to Dr. Sunquist.
I Still Remember: Reflections on the 19th Anniversary of 9/11.