How do we stop The Bleeding of the Evangelical Church? 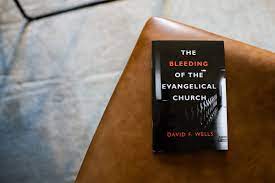 David F. Wells booklet “The Bleeding of the Evangelical Church” is an excellent synopsis of the problem, but how do we stop the bleeding?

In his pamphlet “The Bleeding of the Evangelical Church” Theologian and Church Historian David F. Wells writes that Evangelicalism in America has taken on a “Marketing Ethos.” Wells rightly notes that the culture we live in is “heaven for consumers” and that as a nation “we have 7% of the world’s population but consume 33% of the worlds goods and services.” Well notes that: “in adapting itself to the culture….(the church) has had its character, its purposes and the way it functions defined for it.” Wells goes on to say: “There is nothing wrong with commerce per say, but I would argue that there is something profoundly wrong in trading Christ, with the idea that religion is the commerce of the Soul.” Wells is essentially correct, and there have been a number of books in recent years that have outlined how Christianity became syncretized with Consumerism. Kristen Du Mez’s book Jesus and John Wayne is of particular interest on this topic because it outlines how, as Kristen puts it: “We started writing books for men that were marketed as Christians but never actually went to the scriptures.” Some of the current best-sellers barely reference scripture at all. The history Du Mez traces and that Wells is referring to was both intentional and unintentional but Wells is correct, the results have been disastrous.

I would also argue that for the while Wells is correct, the timeframe goes back beyond his period of 25 years. Christians began mastering the art of marketing and consumerism as far back as the 40s, practiced by the mainline churches that would eventually give rise to megachurches and then the attractional church model. I also think Evangelicalism perfected it and finetuned it as it came into the mainstream of Christianity through the “attractional” church movement in the 80s and 90s. In a sense, consumerism replaced activism in Bebbington’s quadrilateral and so instead of people going out and sharing the Gospel in word and deed we ended up with a large number of cultural Christians who were and are essentially consumers of religious material rather than disciples of Jesus. Here in the Midwest it is still possible to “church shop” that is, to go to a place that caters to your preferences and wants, just like you would shop for a new sweater or a car. You can test drive multiple churches until you find one that fits you. When that church changes or the preacher says something that makes you uncomfortable or challenges your view of life, you can just leave and go somewhere else.

If that does not sound concerning to you, I assure you it should because it is a completely self-centered way of viewing what Church we should attend, it is also unbiblical. The bible does not tell us to be consumers of religious material, but to be followers and disciples of Jesus. The call of the Christian is not to “buy the latest book” but “make disciples of all nations.” The early Christians were not “picking and choosing which Apostle they liked best” but “devoted to the Apostles teachings. It is still true that in most places in the world today to have more than one Church in the same town is an anomaly, and in some places that church meets secretly and has no fixed meeting place. The idea that someone can just go to a place and have it cater just to their wants and desires blows the minds of some of our foreign evangelical brothers and sisters. And in those places where the Church is vibrant and visible the question I hear a lot is: “how do we keep from becoming like your churches here?” That is, how do we keep 80% of our churches from being in active decline and 10% from being stagnant (the other 10% are experiencing healthy, conversion driven growth).

The consumer model itself has taken a hit with Millennials (1980-1994) who see the attractional church model as shallow and even fake and who tend to prioritize genuine faith community and authentic expressions of worship over what is seen as a lack of authenticity and genuineness in churches. It has to be said that whenever a church begins pandering and catering to a specific audience it becomes about the audience and not about the Gospel or bringing glory to Jesus. When the Church comes to be about me, it ceases to be about the He that it is founded upon. When we become consumers of religion rather than followers and disciples of Jesus we start to view Sunday Morning or “church work” like we view any other business or public utility. “We stop wanting the church to be about Christ and demand that the pastor affirms our worldview as we hear it from our partisan news outlet” wrote one ChurchLeaders.com author.

The problem is that the church is the “Sanctified people of God living in Christ, in this world” and is therefore “One, Holy, Catholic and Apostolic.” When the Corinthian’s started breaking up whom they were following, some Paul, some Apollos, some another, Paul warned them against such divisions, even telling them that those who stirred up such divisions should not be allowed among them (he did the same thing at Ephesus). The people who make up the church then are not to be consumers, but are to live as Romans 12 lays out our response to the Gospel should be. If Christ has done all that He has for us, then because of his mercy we should 1. Offer ourselves as a living sacrifice to God as a people transformed, 2. Serve God and one another with the gifts God has given us and 3. Love one another and our enemies whom we are to bless. Consumer Christianity encourages none of this, and in the last year it has become so inward focused that it has taken on a meanness it had only hinted at before.

But how do we stop this? How do we turn around this ship?

Birth Announcement.
The Christian should be Awake to Injustice.