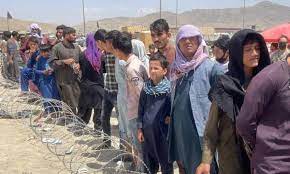 These men and women are not our enemies.

If you watch cable news you know there has been another fault line forming in our society, I should not say another, we have been divided over any kind of immigration for a long time, but as with any topic there are events that will inevitably stir the coals and light the fires of pundits on the left and the right. It is unfortunate that once again those fires are being stoked around what has quickly become a humanitarian disaster in Afghanistan, that this conversation is once again happening at the expense of men and women made in the image of God and that there are people who call themselves followers of Jesus who are, in bad faith and to promote their platform and keep their base happy, arguing against resettling those image bearers here. As with most topics, it is heartbreaking to see some of what passes for reasonable thought  in our outrage fueled markets.

At the same time, I have been encouraged when listening to people like Matthew Soreens of World Relief on the Holy Post Podcast talking about the amount of churches who want to help out with refugees and minister to those on the border (something the federal government apparently does not allow) . Or Russell Moore on The Bulwark Podcast talking about hearing from pastors who want to help out but are struggling with how their people will react. That tells me that there is a good and strong remnant that takes James 1:27 seriously. This is further evidence of the divide between the mouth and brain of the American Church. The Mouth, the public face, has become increasingly anti-immigrant and anti-refugee. They have picked up on cultural Christianity’s embrace of Republican Politics (which as Russell Moore rightly says results in a rejection of the Gospel). They have tapped into the deep seeded fear that many in our pews have been digesting from Right Wing Media over the last twenty or so years, they have stoked that fear to anger and then to hatred. Now, as Jonathan V. Last, the cruelty has become the point as nihilism takes over and it becomes about stoking outrage and getting clicks, not about serious discussion about policy.

This indifference has resulted in opinion pieces from prominent Evangelical seminary presidents which end up labeling Empathy a sin and rejecting the notion that when Jesus said: “love you neighbor” he did not just mean the person immediately next to you, but the ethnic “other” who the secular right wing media has conditioned us to hate (I say us because on many issues I am still a centrist conservative). As someone pointed out in a discussion the other day: “The wheat and the tares of being separated, but the tares of pushing the wheat out the door (of institutions).” Not that we should be shocked, this is a cycle we observe in history, typically before major reformations or transitions. I do think that Dr. Jim Singleton was correct when he told our Pastoral Ministry Class that: “The future of the Church looks a lot like the first century.” That is, we are looking at a reformation that sends us back to something that looks more like the New Testament Church. You can already find it in cities like Boston, Seattle and elsewhere, where secularism has become dominant and Christianity is the unpopular minority.

First of all, none, absolutely none of the fear-mongering that has been a central diet of right wing talk radio and news listeners is true. The refugees who are currently being resettled from Afghanistan are not criminals, they are not terrorists, they are not gangsters (neither are the migrants at the southern border, but that is a different article). These are men and women, many of them with extensive higher education who have aided and helped and worked alongside our military for nearly 20 years. They are not here to steal your jobs, they are not here to “replace” you as one Fox News Commentator suggests. They are men and women made in the image of God who are fleeing a terrible and brutal totalitarian regime that has just taken over their country, a regime that has a history of human rights atrocities and has already murdered brothers and sisters in Christ from the Afghanistan Church. Which brings me to another point, many of them are our brothers and sisters in Christ, and while that is important, it is also tertiary at this point. I am heartbroken by the stories from friends in the military who just want to get their friends out, yes, friends, who translated for them, aided them, some of whom even saved their lives.

Yet, despite these facts, many of us act more like the Levite in Judges 19, allowing our brothers and sisters to be given over to brutality and murder like the Concubine when we should be willing to meet them at the well at the hottest and most inconvenient part of the day or listen as they ask us for food and shelter or spiritual and emotional healing using the resources God has blessed us with to bless others. The Church should be throwing open its doors to the refugee, as well as the widow and the orphan. We should be willing to say: “Sleep in my recliner, or on my floor, rest here, do not be afraid, I will help you get on your feet.” Instead too many of us are indifferent to the plight of the other, even the very homeless who live in our cities. Our rugged American Individualism tells us that we are supreme and no one better tell us otherwise and that anyone who does not have what I have should just try harder.

Which brings me to Jesus, the real one, not the Americanized Jesus who smiles at you sweetly and approves of every sin and destructive habit or thought. The one who told us to “make disciples of all the nations, baptizing them into the name of the Father, Son and Holy Spirit.” The same Jesus who found more faith in a Roman Centurion and Syrophoenician woman then he did in all of Israel. The same Jesus who is the fulfillment of the Old Testament Law and writes the civil law on our hearts, the same civil law that says: “you shall love the foreigner in your midst.” The same Jesus who summed up that Civil Law as “Love the Lord your God with all your heart, with all your soul and with all your mind and love your neighbor as yourself.” This Jesus, who tore down the very dividing wall of hostility between us and God and us and one another, through his death on the Cross and who prompted James to write: “True religion is this, that you care for widows and orphans” and “What good is it if someone comes to you in need and you say: “Be warmed and filled” and send them on their way (without filling their need).” The same Jesus whose Mother prophesied had: “filled the hungry with good things.” That Jesus is the one who we should follow, not the small Jesus of American cultural Christianity that can only do what we want him to and never challenges our preconceived notions. This Jesus left the Church here to be a light to the world and in doing so, we were to take care of the hurting. As N.T. Wright says: “The Church is called to be the people of prayer at the place where the world is in the deepest pain.”

While he said this in reference to the Pandemic, it applies to the situation in Afghanistan too. It is not the Christians job to ask why or tell people where to go, we will do those things because we are naturally curious, but that will all get sorted out later by the Historians and commentators. Our job is to be a people of prayer and then upon receiving instructions from Jesus we should be a people of action who are caring for our grieving Afghan neighbor, opening our hearts and our homes to those who are hurting and in need. Take the time to mourn and grieve with those who are grieving, pray for those who are in danger or have been displaced and then go and find a way to help through World relief or Catholic Charities. You may find that the people you have been told to fear are not that scary, but are in fact, fellow image bearers fleeing a deadly situation.

Church, we were the ones in History who cared for the people no one wanted, we still have the most resources (by the blessing of God) to do just that. So let’s band together and do what God has called us to do in regards to Afghan refugees, each of us has a part of play in loving our neighbors, let’s do it well so that one day we might hear: “Well done, my good and faithful servant.”

One Town, One Church
What Erin Saw