“This is the Temple of the Lord” 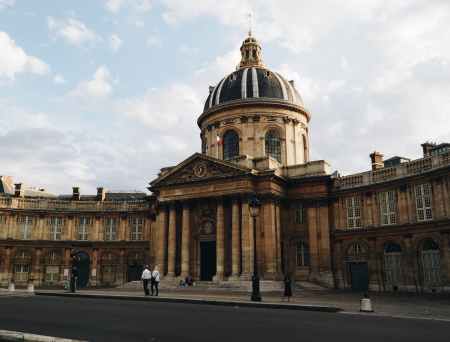 On Institutional Protection and the protection of institutions.

One of the ideas that drew me to ideological conservativism when I first read Edmund Burke was the place and role of Institutions in Society. Burke believed that it was institutions which, through serving the people, conserved the people and thus the society. Strong, local institutions were essential to preserving the people of a society. This is a principle I still believe in, strong religious institutions, which are also healthy, make a huge difference in a local city or town. Local banks, which tailor their services to the people around them, are much more effective than big banks headquartered thousands of miles away, whose polices do not always reflect the local economy. The founding father’s believed in strong local governance by the magistrates precisely because they understood that different localities had different problems. Yes, they had a vision for a bicameral central system, but that central system was designed specifically so each of the various demographics could be heard and have their interests and needs considered by the federal government. Representatives were not there to gain power and wealth, but to speak for their constituents and vote in their best interest. That is, they were to strengthen the institutions from whence they came to preserve the people whom they represented.

Again, this is a principle I still think viable. I am all in favor of strong local institutions and governance, especially churches and other religious organizations. But what happens when those institutions that are meant to preserve people, start working to preserve themselves. That is, they begin to view themselves as too important to fail, or they become too big to fail. Or, what happens when the people guiding those institutions become more interested in power and influence that they seek to force the intuition to protect them and so to do that they engage in institutional protection. This usually means denouncing and demeaning any and all detractors, throwing victims to the societal wolves and participating in general wickedness just to 1. protect the institution so that 2. the institution can protect them.

It may seem odd to us, post-enlightenment Americans to hear this, but in reality God cares little about our instructions, nor is he interested in protecting them. He will guide and refine his people, the Church, but institutions and governments come and go and that is okay to Him. Yet, as humans we have a long history of looking to institutions (religious and otherwise) as if they can offer the protection that only God can. For instance, in reading Jeremiah 7, it appears that the people of Jerusalem had fallen into the mindset that because the Temple was present in Jerusalem, they would be sparred from the destruction Jeremiah was prophesying. In verses 3-11 Jeremiah takes aim at this mindset saying: “This is what the Lord of Armies, the God of Israel says: “Correct your ways and your actions and I will allow you to live in this place. Do not trust deceitful words chanting: “This is the Temple of the Lord, This is the Temple of the Lord, This is the Temple of the Lord.” Instead, if you really correct your ways and your actions, if you act justly towards one another….I will allow you to live in the land I gave to your ancestors long ago and forever” (3-4, 7). Yes, God had established his Temple in Jerusalem under the reign of Solomon, but by the time of Josiah the temple had become “a den of robbers” (7:11, Malachi 2). That is, the people were going to the Temple, participating in the prayers and making the proper sacrifices to YHWH, but were then going out and “oppress(ing) the resident alien, the fatherless and the widow” (7:5). Apparently thinking: “I go to the Temple of God, I will be alright, there I will not be carried to exile. Silly Jeremiah, the Temple is here, we will be fine.”

In a way, the institution of the temple had become God to the people, even as God’s glory cloud shown from the Temple Mount, it was not as powerful as the temple itself, at least in the minds of the people. So long as they said their prayers and made their sacrifices the temple would protect them. In Jesus’s time this would switch from the people seeking the protection of the temple by participating in its worship, to the temple protecting itself though the priests exclusion of the poor, the resident alien, women and eventually, Jesus and his followers. By protecting the temple from Jesus they were protecting themselves from Rome. Still, in Jeremiah’s day there was a sense that while the temple would protect you, that meant the temple must be protected on the outside, even if the inside was neglected (see 2nd Kings and 2nd Chronicles).

The problem is, this is not the view Jeremiah says that God takes. The temple as an intuition will not protect you and it will not be protected so long as it continues to be a den of robbers. In fact, it is headed towards being refined by the Son of Man, as portrayed in the Gospel’s when Jesus enters the Temple and cleanses it. The temple of Jeremiah’s day would be destroyed by the forces of Nebuchadnezzar in 586 BCE and its presets and utensils of worship carried off to Babylon as spoil. All those who attended the temple during the week, all those who thought they were fine because they said their prayers and offered their sacrifices would either be killed or carried off into exile. It did not matter if you sat in the same place on Sunday, judgement came because of how you treated the “resident alien, the fatherless, the widow.” God even says though the Prophet Isaiah that their sacrifices and worship were “a stench” to him because they had “blood on their hands” (Isa 1:15-20). The good news though, in both Isaiah and Jeremiah, is that if the people will correct their ways, God will relent in his judgement. Unfortunately they did not, and neither did God. In the end, both protecting the temple and the protection of the temple meant nothing because God is God and He keeps His word and corrects those who need correcting and forgives those who confess and turn.

I cannot help but think the same thing is happening today. It is certainly happening with the SBC Executive Committee who just ignored the will of The Messengers and the sexual abuse task force. It is also true in the case of Bethlehem Baptist and its seminary as their president writes about “the Sin of Empathy.” In both cases, men in power are giving the preverbal middle finger to the survivors of sexual assault, physical, emotional and spiritual abuse in the interest of protecting themselves, their positions and their intuitions. There is a plethora of documentation revealing that SBC Exec Committee members knew about egregious cases of abuse, sexual and otherwise. The same is true about the leadership of Bethlehem. Instead of taking the position of the compassionate, gentle and lowly leader, these men have closed ranks and attacked anyone who disagrees with them, treating victims with a viciousness that should never find itself in places where Christ’s name is invoked. “This is the SBC of the Lord, This is the SBC of the Lord” they chant: “We must do evangelism, this is a ll a distraction from evangelism” (the same justification for why the SBC would not bring Slave Holders under Church Discipline in the years leading up to the Civil War). “We go to Church on Sunday, we make our tithe and sing our worship songs, many of us pastor churches, it’s about saving souls anyway, who cares what happens to the body.” I wish I was being hyperbolic, but I am not.

The problem is, as I have said before, if you are not living the Jesus Life in the Jesus Way by the Jesus means, if you are not doing what Jesus commands us to do, what the bible tells us to do. It does not matter if you are a regular church attender or and executive committee member of the largest Protestant Religious Intuition in the world and a Pastor, you will not see heaven. If you find your safety and security in the institutions of man and seek to protect those institutions so you can keep your safety and security, it does not matter what your Sunday attendance record is, what your giving record is, where you sat on Sunday. None of that matters if you live Monday to Saturday the exact opposite of how the Bible teaches us to live.

Another issues we run into, that our forerunners in Ancient Israel did not face, is that, in a secularizing society, when we make moves to protect our power and influence, unbelievers look at that and mock us. It actually works against the goal of “Evangelism” not in favor of it. When secular people see us ignoring victims, they form a dim view of us and of the God whose name we claim. When they see us following the advice of Atheists rather than Jesus, we make ourselves out to be a laughingstock. The same is true when Churches turn on pastors and run them out of town. Do it enough, you become a laughingstock to your community, refuse to repent, refuse to show humility, it will continue to get worse, and do not even ask why people are not coming. By seeking to protect yourself, your comfort, your position of power and wealth, you are inviting the very judgment from the world and from God that you fear. Hiding behind the church doors did not save the ancient Israelite, it will not save you. If we mock victims, if we oppress the resident alien or whatever sin we commit, we are inviting wrath and not glory.

The Political Captivity of White American Evangelicalism.
Drinking of the Ancient Fount