The Beauty of All Saints 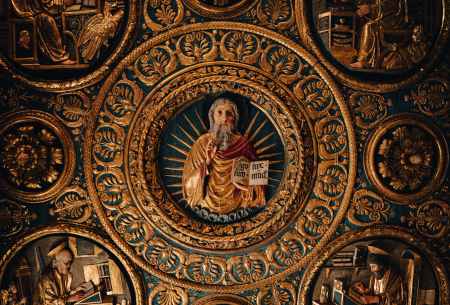 Perhaps there is a reason to celebrate Halloween after all.

As I have entered adulthood, Halloween has been a tricky holiday for me, as it has been for many Christians. The question: “Do you celebrate Halloween?” has been heavily debated on Christian Twitter and in person at church meetings for as long as I can remember. Halloween is associated, in our popular, secular imagination as either a time of year when the kids put on cute costumes and ask for candy, or as a time when we openly celebrate the occult. When I was at Gordon-Conwell it was often said that one should avoid going to Salem during the month of October as the streets became filled with pilgrims coming to the site of the famous witch trials. Certainly, to the popular and secular worlds, Halloween is a celebration of the occult and that leaves Christians at a loss as a people. As for whether or not Christians should celebrate the holiday at all, we are as divided there as on any other topic.

The traditions of Halloween do find their original historical base within the Occult, it was the Celts, 2000 years ago, who first put on costumes and lit bonfires to “ward off ghosts” but the Holiday was, in the eighth century, adopted by the Church as All Hallows Eve by Pope Gregory III. Both the original Celtic Pagan holiday and the Christian Holiday were meant to celebrate the dead, but unlike the Celtic observance, the Christian celebrated the dead. The Great Tradition (Anglican, Roman Catholic and Orthodox) celebrated the Saints who had gone before. All Hallows Eve, which is where our modern word Halloween comes from, was the night of reverence and celebration before all Saints Day the following morning. All Saints was a day to celebrate all who were organically one in Christ through the Holy Spirit. To modern protestants, who look to the reformation as their roots just call Halloween or the Sunday before or after October 31st, “Reformation Sunday” and use it as a celebration of the Reformation.

No matter how you might chop up the history, there is a strong Christian tradition behind Halloween. We even take the name for the holiday from the Christian tradition, not from the Celtic. By the way, there is some evidence in the writings of St. Bridget in the 5th century and other pre-Holy Roman Empire Irish Saints that this attempt to redeem a secular, pagan Irish holiday were already in the works, sometimes though they failed to maintain Christian Orthodoxy..

Here is my question to you, dear readers, should we honor those who went before us? Or should we ignore their legacy? The bible encourages us towards the former. The Book of Common Prayer for all Saints Day has the first lesson listed as Hebrews 11:32-12:2. Many of us know that Hebrews 11 as “The hall of faith.” That is, it lists the Saints who walked by faith and not by sight and received the blessing. But let’s look at 11:32-12:2

32And what more shall I say? For time would fail me to tell of Gideon, Barak, Samson, Jephthah, of David and Samuel and the prophets— 33who through faith conquered kingdoms, enforced justice, obtained promises, stopped the mouths of lions, 34quenched the power of fire, escaped the edge of the sword, were made strong out of weakness, became mighty in war, put foreign armies to flight. 35Women received back their dead by resurrection. Some were tortured, refusing to accept release, so that they might rise again to a better life. 36Others suffered mocking and flogging, and even chains and imprisonment. 37 They were stoned, they were sawn in two, [1] they were killed with the sword. They went about in skins of sheep and goats, destitute, afflicted, mistreated— 38of whom the world was not worthy—wandering about in deserts and mountains, and in dens and caves of the earth. 39And all these, though commended through their faith, did not receive what was promised, 40since God had provided something better for us, that apart from us they should not be made perfect. Jesus, Founder and Perfecter of Our Faith HEBREWS 12 Therefore, since we are surrounded by so great a cloud of witnesses, let us also lay aside every weight, and sin which clings so closely, and let us run with endurance the race that is set before us, 2looking to Jesus, the founder and perfecter of our faith, who for the joy that was set before him endured the cross, despising the shame, and is seated at the right hand of the throne of God.

This passage encourages us to look at the examples of those who went before and honor them because God honored them. But it also points us to the true point of their lives, the lives that all those mentioned in this passage were looking forward to, that descendant of David whose throne would last forever. It is not a coincidence that that so-called “Hall of Faith” culminates in this great exhortation: “Keep your eyes on Jesus.” None of these saints in this passage or those who have gone after them in the great tradition of dying to self and living for Christ would tell us to look to them, but to see their lives as a pattern of what it means to pass through the waters of baptism and be born of water and spirit. What it means for the Holy Spirit to come and dwell, to share in the incarnation of Christ, not just in the celebration of the Eucharist, but in the day to day sacrifice of the Christian life. The writer of Hebrews is not honoring these people because they dll pulled themselves up by their boot straps and got through, on the contrary, none of them would have made it without God himself working in and through them. Abraham believed on Faith that God himself would fulfill the covenant promises, as did David, but none of them lived to see the Covenant fulfilled in Christ. God made the promise, they believed God was telling the truth and died having not seen the promise fulfilled.

In many ways, the same is true of those who have died before the final restoration. Those who have gone before and walked in the way of faith and redemption. They too are examples to us, and it is them, the entire slate of saints from Abraham to Francis to Teressa to those who should be celelbrated as Saints but are not because “that’s too catholic.” We honor them and celebrate them as: “a little lower than the Angels.” Because they were made in the image of God and were examples of Christ image during their time on Earth. They walked by faith and not by sight. Mother Theresa did not see Leprosy eliminated in her lifetime, but she had faith that one day it would be, that the promise of God would be fulfilled, that there would be no more sickness because all was redeemed and made new.

Let us be honest, this year has been hard. Set aside what has happened just to my family, it has been a hard year for almost everyone I know. A year when we have had to lay aside comfort and security, a year of unrest and upheaval. But for most of the saints who went before us, for most of the great Martyrs of the Great Tradition, that was the story of their lives. Abraham moved and moved again, Baruch and Jeremiah faced exile, imprisonment and shunning, Jesus was crucified, Paul was decapitated, James stoned, Peter Crucified, John exiled, Polycarp was burned at the stake, Ignatius persecuted, John Huss was burned at the stake, need I go on? While these people were alive, they lived a life marked by upheaval and discomfort. Yet, they ran the race and kept the faith, they kept their eyes on Jesus and Jesus alone. They did not beat their chest or look for a nation state to save them. They just looked towards Jesus and lived the life he put before them to live.

Just as He did for saint after saint who we celebrate starting this past Sunday and on to next week. May we be reminded and inspired by their sacrifice.

The Pastors and People the Church Needs.
NEEDTOBREATHE: Music for Real Life.