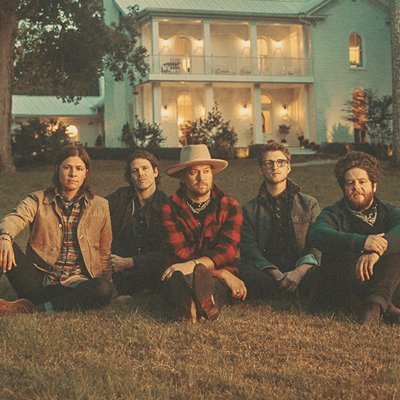 Christian Music’s Biggest Folk Band is music for real life and we should celebrate them for it.

When I was at ARL I was handed a copy of a folk album to review. I had heard of the band, a little outfit called “NeedToBreathe” had been lighting up the Christian Music Charts for a few years with a couple of hits like “Washed by the Water” and “Something Beautiful.” I had largely dismissed them as another folk band that stayed in the standard Christian Music Label lane that they had been assigned to, not exactly sell-outs, but not exactly stand outs either. I had never owned one of their albums, just heard their radio singles and since I was covering mostly Christian Hardcore / Rock and Metal (and the occasional Rapper) I was content to leave it that way. So when someone handed me a copy of  their 2011 outing The Reckoning  I was not expecting much from the South Carolina Folk Rockers.

What I did not know at the time was that the band would become a unique part of both my journey as a musician as well as a human being. Since I no longer have access to the Review, let me sum up my thoughts on the album like this: The Reckoning should be considered a band coming into its own, a record that shows a move from industry compliancy to a full, mature folk rock band. That is, this is what it looks like when an artist comes to a full awareness and understanding of themselves and their music. Most recently, this is Rend Collective putting out Good News or Demon Hunter putting out True Defiance or any NF album ever produced. Whatever the shortcomings of learning the industry and finding yourself, they are almost completely eliminated. That is, I cannot remember the “made for radio” sounding song on the album, just the band being the band we know they can be. Of course, it helps when the band begins the album with a touch of introspection, as they did with :”Oohs and Ahs”  a song about producing the very canned music that had caused me to dismiss them in the first place.

Before I go on, let me say that none of the songs I mentioned that were “made for radio” were bad songs, they were actually pretty good compared to a lot of what was out at the time. They just do not meet the bar set by later projects, especially Hard Love which may be the bands best album to date. That also does not mean there are not amazing songs on those first few albums, there are, they just weren’t as complete as later projects. As a critic, one looks for consistency and those early albums just do not have it in the same way the later ones do, nor are they as original as the later music, the early stuff is safe, the later stuff is dangerous.

But that’s just it, the early music was fun, yes, it had its grand messages and deep points, but it also has a lot of fun rifts and trite songs that really do not say anything at all. The later albums are fun, but also have a lot to say. NeedtoBreathe has become, in my mind, a soundtrack for real life, they have become a true folk band and they have done it well.

Folk, as many of you know, is meant to tell a story that reminds the reader or listener of real life, life on the farm, an experience of wartime or romance. It reflects the lived experiences of the people who are listening and does not feel removed from the person. “West Texas Wind” which closes out their most recent project is almost a perfect descriptor of my evenings, and prayer life, this year, as has “Wasteland” the title track of the 2014 release. These are songs you listen to and you think: “Yes, that’s me, I’ve had that experience.” This is music for real life people in the middle of their lives who are experiencing different struggles and triumphs. If you want another example besides NeedtoBreathe, go listen to the folk music of the Civil Rights Movement, perfectly capturing the struggles of the movement in song.

Now, I know many of us listen to music to escape, Christian Music has made a nice niche market for those who wish to think everything is okay and their great and God will automatically make them rich (is that too harsh) but we need music in our lives that is going to make us think too, we need music that is going to challenge us and be relevant to us and we need music about watching our high school football team lose every Friday Night while we struggle to get by in a small town. Without these songs we can easily lose sight of reality, become grounded in untruths and form a false sense of ourselves. We need music for real life, we need genuine, we need NeedtoBreathe.

Now, I know no parents are telling their kids not to listen to this band, but there are some artists who parents actively tell their kids not to listen too because the content seems “dark.” I remember my parents objections to bands like Disciple, Demon Hunter and Thousand Foot Krutch (my wife grew up in circles where The Getty’s were unacceptable, can you imagine?). Now I see parents objecting strongly to their kids listening to NF who is very open about the pain and trauma in his life. But as I’ve said before, instead of objecting, maybe we should seek to understand why our kids find solace in music that sounds a certain way or brings up certain topics. Why was Emocore so popular among Millennials? Well…at this point…that is pretty obvious as so many of my peers grew up with some kid of trauma. Why is NF so wildly popular to a generation of kids who grew up with the Opioid Crisis? Perhaps it is because his own mother was a victim of that crisis. Why are some of the most popular songs I’ve written ones that come from a place of deep pain? Because it reflects a shared experience.

So, if you have never listened to NeedtoBreathe, I highly recommend them and if you have not watched their documentary, I strongly suggest you do that. And if you struggle with some of the music your kids are listening to, I strong encourage you to sit down and talk with them.

Because you never know how God might be using that band to help them grow up into maturity in Him.

The Beauty of All Saints
Everything is Awesome….Maybe….