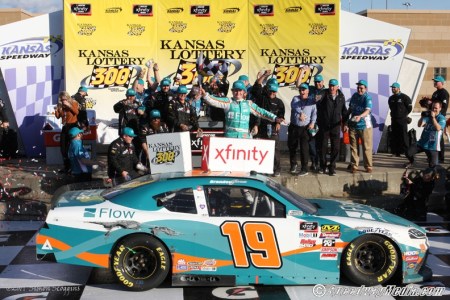 At the Intersection between Christian Culture Wars and Conservative Meme Wars lies the most unserious of memes.

Of all the NASCAR news we had to consume this year, including Darrell “Bubba” Wallace Jr. becoming only the second African American Driver to win a race at NASCAR’s top level and Kyle Larson becoming the first Japanese American to win a championship (go Kyle!) are we really talking about “Let’s go Brandon?” Let me back up here, for those who did not know, I am a NASCAR fan, a huge NASCAR fan, I have been for over 20 years, since little 7 year old Jonathan saw Jeff Gordon win at Watkins Glenn International while Channel Surfing on a hot summer Sunday in Ohio in 1997. I was a fan through Jimmie Johnson’s entire career (wow) and probably will be through Chase Elliot’s. I am mainly a fan of the cup series, I rarely watch the lower series unless something important in happening. So I was not watching on Oct. 2nd when Brandon Jones won his first race in NASCAR’s second tier Xfinity Series. I have since gone back and watched Kelli Stavast’s interview a few times and while it is quite obvious the crowd is not chanting “Let’s go Brandon” it is also clear that Stavast was not really sure with what to do with what the crowd was really chanting. Stavast has not commented on the interview, and I doubt she ever does. But if she was trying to cover for the crowd, it’s unfortunate. For those who do not know, “Let’s Go Brandon” is a euphemism for what the crowd was really chanting that day: “F*** Joe Biden.”

As far as Political Memes go, it is a deeply unserious one, created unintentionally by a reporter who was trying to do her job post-race while some opportunistic fans were more interested in spreading a political agenda than celebrating the first victory of an up and coming driver in one of the greatest sports in the world. It also serves as an example of how much our culture has become saturated with our new meme based politics where owning the other side has become more important than actually governing. As Jonathan V. Last points out any chance he gets at The Bulwark. “We are an unserious people, living in unserious times.” So much so, NPR reported that “Let’s go Brandon” has found its way into Congress via Scott Duncan (R – S.C). And if we are an unserious people, we are using unserious means, and Let’s Go Brandon is the most unserious of them all.

To make things worse, the viral chant is now not just found on T-Shirts and Hats worn by Congressmen and NASCAR Fans. It is also being chanted in Churches, specifically at Cornerstone Church in Houston which is Pastored by John Hagee. The Church was hosting a Q-Anon rally entitled “ReAwaken America” when the viral chant broke out, but as Newsweek Reported, it did not start in the crowd, it started from the stage. (disclaimer: Newsweek itself can traffic in Conspiracy Theories itself, however this report is confirmed by Hagee himself who later apologized for the event.). So here we are, Christian Culture War and Political Meme’s have now intersected and it is in the most unserious of places.

First of all, as a fan of the sport I am disappointed in the part of the base that has attached itself to this meme. They have also spoken out vehemently against Darrell Wallace Jr and Daniel Suarez being regulars in the sport. To some extent, this is to be expected given the sports origin as a southern good-old-boys club where tracks like Darlington International Speedway did not even admit blacks, let alone let them race there until after the Civil Rights Act. Where you can find entire facebook groups devoted to racist memes targeting the two drivers I mentioned above. But the sport itself has come a long way, and while the section of the fan base that denounces the racism of the others is growing and getting more vocal, we have a long way to go. This is the same fan base that was extremely divided by the former president serving as Grand Marshal for the 2020 Daytona 500 and were equally as divided when NASCAR as a Sport and Racing Community rallied around Darrell Wallace Jr. after an inappropriately tied garage stall pull (it did look like a noose) sparked outrage at Talladega last season.

As for the Church, the ties between Q-Anon and Conservative Evangelicalism have seemingly been under reported, despite groups like The Gospel Coalition laying out exactly what Q-Anon is. ReAwaken America, the Q rally at Cornerstone, uses the language of Christian Nationalism in its writing and Q tends to view itself, or at least be spoken of by its devotees, in religious terms. The Storm is said to be the thing that will restore America as a Christian Nation. And since the Democrats are, according to Q, a cabal of Child-Trafficking Pedophiles who need to be exposed and destroyed, they need to be defeated in order for Christian America to be restored. If you believe all this, then sure, “Let’s go Brandon” makes sense.

The problem is, Conspiracy Theories like this are designed to be unprovable and instead use a combination of smoke and mirrors, misinterpretations of events and writings and mind control (brainwashing) to get you to believe them. The best conspiracy theories are just believable enough but are unprovable. If anything, the opposite is true, they are easily disproved. But when the event does not happen, like say, a former president being reinstated on August 15, the goalposts get moved back to October and when it does not come true then, the goal posts get moved again. To the outside observer this is quite obvious and rediculous, but a good cult leader has their followers convinced they are correct…and unfortunately…

Yet, as Last has also pointed out, these things do not happen in a serious society. In a serious society we take events like January 6th seriously, in a serious society we do not shout “F*** Joe Biden” within ear shot of a microphone while a very deserving young driver celebrates his first national series win. In a serious society, Brandon gets to enjoy his win and NASCAR bans those fans for their bad acting on live television. In a serious society, a person who crosses state lines with a fire arm and kills two people is convicted of (at least) reckless endangerment or homicide. However, as Last has pointed out, we no longer live in a serious society, we live in one marked with unserious demagoguery, performative cruelty and a nasty amount of “Bothsidesism.” And somehow we find the Church right at the center of it all. The very people who are told to “Put off coarse joking, Hatred, evil and malice of any kind.” The very people who are supposed to “Love your enemies and pray for those who persecute you” are shouting a euphemism born out of hatred and spite in the pews of a house of Worship.

This is true of the Anti-woke, anti-CRT (and now Anti-Deconstruction) crowd, while it is certainly not true of everyone in the crowd, many are unserious, bad actors. To return to a format I used in the last paragraph, a serious society would listen when a large segment cried out in pain as our Black brothers and sisters have over police shootings. Instead we get the Anti crowd continuing a trend of downplaying Black pain and suffering for the sake of what? Cruelty? Money? Many of whom have no idea what CRT and Deconstruction are and have demonized it simply because that is what is popular to do in their circles. In a serious society, in a serious church, we would listen to sexual assault victims. Instead of attacking them on Twitter, threatening their very lives or trying at every turn to discredit them. Instead of the grace of heaven, we find the cruelty of Hell, instead of the love of Jesus we find the gracelessness of the Pharisees.

Do we not see that this is only going to continue to bring down on us the very kind of persecution we already mistakenly believe we are under? It is possible for us to become a self-fulfilling prophesy merely by the way the Church is behaving right now. These are the types of behaviors that are the reason God gives the government the power of the sword which he has always, throughout history, used to refine the Church. Hear me out here, I am writing this as one informed. When the Church is more easily identified with a political movement or figurehead, it ends in disaster for the Church. Historically speaking, the fact that Peter Wehner can write the line: “When you ask people who the Evangelical Church looks like, they are more able to say “Donald Trump” than “Jesus Christ.” is a very bad thing, a very bad thing. It is an invitation to the kind of judgement we learn about in Jeremiah and Isaiah and the type of Judgement we have seen the German Church experience post World War II.

Brothers and Sisters, we have to take these issues seriously, it is to the detriment of Christ and our mission when we do not. We need to abandon these foolish conspiracy theories and culture wars and memes and come back to Christ and the Great Tradition that He has handed down to us through the Holy Spirit. We need to take the suffering of our neighbors seriously again, because if we do not, we will find ourselves in real and actual persecution.

Everything is Awesome….Maybe….
An Update from the Faulkners