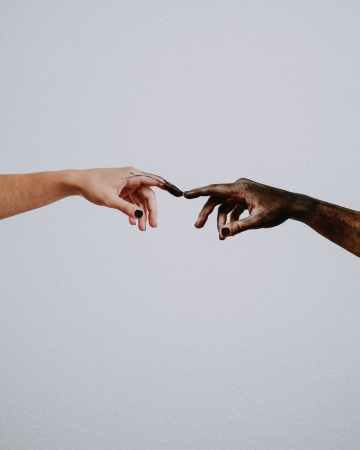 “Look in my eyes, touch my face, we’re just limping along in the human race.” – Jars of Clay.

Many of you know that have been and will always be a huge fan of the band Jars of Clay. The CCM group first caught my attention in Middle School when “Fly” was playing on Christian Radio and their album: “The Eleventh Hour” was one of the first three records I ever owned. Since then I have expanded my collection to own every major record they released from 1991’s Jars of Clay to their final project “inland.” The first song we listened to this year was “Dead Man (Carry Me)” from their album Monster, appropriate because the song begins: “January one I’ve got a lot of things on my mind.” The band has been and always will be a special part of my journey as a believer, and that is not just because of a personal connection I have with the band itself.

Jars of Clay always had a knack for “saying something.” That is, you could not get through a Jars of Clay album feeling like you found a trite song or an idea that had not been chewed on thoroughly. The bands thoughtfulness made them a prophetic voice within Christian Music both in their songwriting and in their work outside of music. Their songs have addressed everything from Christian Identity (“Trouble is” to the effects of Colonialism and Apartheid (“Light Gives Heat”). The bands lead singer was one of the first in CCM to get pushback for comments he made about how Christians treat people from the LGBT community and they were among the first bands to speak out against the culture war mentality of evangelicalism (similar to the way Rich Mullins did it in the 80s and 90s).

Jars of Clay has been on my mind a lot in the first few days of 2022, in part because of their song “Human Race” the chorus of which I have used as the tagline for this article. The song opens with a question that I am sure all of us have asked at some point since the Pandemic began back in 2020. “World without end are you ending?” The song goes on to talk about everything from the lack of depth in our relationships, to the way we treat one another as disposable, to the fake portrayals of our lives on Social Media, the shallow songs which are easily forgettable and the lack of good entertainment in an entertainment saturated environments. Ultimately, we have, per the song, become a people who will not believe unless we can manufacture it, have faith in our access which allows us to over indulge who dismiss compassion or label it as a sin (as has happened at BCS and now The Gospel Coalition) and whose art is dull and uninteresting. Resulting in such a Massine disconnectedness that leads to even the sound of a heartbeat being “out of place.”

On the surface, this may sound like Baby Boomers complaining that the world is not the same as it once was. But it truly is not, Dan and Charlie and the rest of the band have hit on a very important problem. With all our connectedness, we are even more disconnected than ever, so disconnected that ace to face communication seems bizarre, being in the same room with another human being feels weird. Anthropologists and Psychologists are starting to notice this phenomenon as polls and survey’s show a major increase in loneliness that has only become worse due to the isolation of the Pandemic. And while by every indication people’s lives are improving drastically, there is a still a grand amount of pessimism that crosses almost every generation as depression and other mental health issues worsen, especially among younger demographics.

Later on Inland there is another song that illustrates this point Dan is trying to make called “Loneliness and Alcohol .” In the song a man is described as watching television while he rages at the world, drinks heavily, loses control, and contemplates suicide. The song, in fact the entire album, gives example after example of just how disconnected we have all become. That we are always looking to the next best thing or to entertainment and so we never really grow up or mature and so we live in an “age of immature mistakes” where causes us to “slip away while I was sleeping, to climb the tallest oak and see the lights.” disconnected from each other and from our history. 7 billion solitary islands, just sort of limping along, longing for deep human connections, but not knowing how to go about forming them, or thinking that we are forming them based on Social Media likes and “friends.”

Keep in mind, this album came out back in 2013, before rise of the alt-right, before the 2016 election and long before anyone but scientists had ever heard of COVID-19. In the 9 years since the album came out, things have gotten much worse, much of it fueled by exactly what Jars of Clay sang about on Inland. 7 Billion individual islands have become 7 billion individual tribes, belonging to a group, but not really belonging to a group. Over at The Bulwark Amanda Carpenter noted that even people within these tribes cannot agree and, particularly in right leaning tribes, do not get along.

Interestingly enough, Jars of Clay offers us a corrective to our current disconnectedness, that is, to keep heading: “Inland.” The song based on the story Odysseus tells the listener to “take off the shoes you came on, feel the earth you’re made from” and to “just keep heading inland, where no man is an island, come on home to me.” The solution, to all this disconnectedness, is to stop being islands, to stop trying to forge our own path and to just come home to each other, to look around and realize that people are with us and we are with them and we can work together even while we disagree on things.

This is really how the Church should be anyway, as a people who are born of water and spirit, built upon the blueprint of the incarnation, there is an organic unity that should not be broken because we are incarnate with the Holy Spirit. We are not supposed to be so disjointed and we should mourn the fact that we are. The church is the one place where those deep connections should be formed and formed easily because there is already a bond there. However,  right now, the evangelical church in-particular is rife with idolatry, whether it be Christian Nationalism or megachurch leaders or man-made philosophies like complementarianism that live off a theological heresy like Eternal Subordination of the Son. It is not wonder we are disconnected, especially when you factor in the greatest idol we are dealing with now, the self and the self’s own council, so instead of heading inland, we end up going further out to see.

The fact is, we are limping along, we limped through 2020, 2021 and we come into 2022 needing a wheelchair. That is not to say that humanity is hopeless, indeed, we are far from hopeless because of Christ. But we have traded real hope for the false hope of a political messiah or the hope of self-fulfillment through identity and so we limp further and further away from one another only to startle at the sound of a heartbeat from another human when we accidently encounter one another out in the wilderness. The foreignness of the sound, driving us to run, even while we desire to connect, to feel some warmth.

I pray one day we will find these connections again, deep and meaningful as they can be. I hope we can discover anew the life that Jesus gives us through the Holy Spirit.  That we would discover one another again, not as avatars, but as real, created beings who have denounced the nihilism of the culture around us and embraced that which is true and real and exists. Then maybe we will lay aside stupid fights about CRT and see our brothers and sisters of color for the beautiful human beings they are who have suffered greatly and continue to suffer greatly both at the hands of individuals and systems. Or we will look in the eyes of an immigrant and not say: “be warmed and fed” and then send them on their way empty handed. Or perhaps we will…well….I could go on for days. And I hope you will, I hope you will step out of yourself this year, into Christ and by stepping into Christ, you find yourself in the deeply connected family of Jesus where we are fused together by the Holy Spirit.

My friend, just keep heading inland, where none of us are islands, its where you’re supposed to be.