The Great Divorce (Of a Nation) 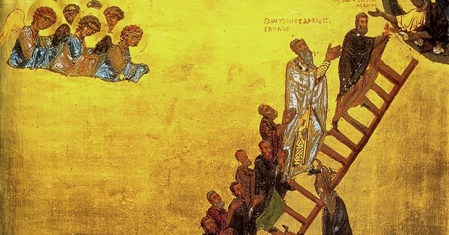 C.S Lewis’s depiction of Hell is a blueprint to understanding what is happening to America today.

In C.S Lewis’s The Great Divorce he describes Hell as a city which is constantly experiencing Twilight where people come and build a house but over time slowly become disillusioned with their neighbors and move away from the city, when others move around them, they move again until they get as far away as they possibly can from one another. Once in a while a bus comes and souls that are still redeemable or still want redemption can get on the bus and go to heaven for a chance to be redeemed and reconciled with ghosts from their own past who are there to guide them further into heaven. To the ghosts who come from Hell, Heaven is a hard place, but the further in you go it gets softer until you experiencing the grass like the ghosts of the redeemed folk who have been guiding you.

As strange as it may seem, this seems an apt comparison to our own cultural moment in the United States today. In the 60’s and 70’s coalitions were built on the right and left. Those coalitions were, in essence, cities of thought where even when we disagreed, we could dwell together in relative peace. Overtime, those coalitions grew to include more and more tribes, but as ideological diversity increased, the distance between the different groups grew, that is, people began moving out of the city, seeking out new territory. Tribes would move farther and farther apart and eventually begin their own internecine wars. Interestingly enough this is what Amanda Carpenter at The Bulwark was referencing about those who live in Red States not being able to get along in an article I referenced earlier this month, though this is also true of the various tribes of the left as we have seen play out with the presidents coalitions internecine fights that have made headlines in recent weeks. We are in essence living in C.S. Lewis’s depiction of Hell, where everyone is fighting for themselves and moving farther and farther apart, common ground is being lost at an alarming rate and I fear those who believe we are headed for some kind of civil war are correct. We are a nation who is experiencing a trial separation as states separate into red states and blue states and sometimes, Red cities and Blue cities. Separations can lead to divorces and divorces can, and given our current political climate, will be ugly. Some states have even made a fuss about possibly succeeding and polls show that there is a large part of the Republican Party who supports Red States succeeding from Blue States.

But to stave off the divorce of hell, we must reclaim that hard earth that is Common Ground, and that may be just as painful, though much less deadly. In each of the Hellians encounters with their heavenly friends, something is expecting of the Hellian ghost, he must lay down something, his pride, his anger, his selfishness, his independence, his inability to think for himself. Whatever the thing that needs to be given up and repented of, the result is the same, reconciliation with his heavenly friend and entrance into heaven, heaven will become much softer.

Let me stop and be clear here, this is not a “Both-sides” issue, yes, there are elements on the left that need to lay down their weapons, repent of their pride and anger and be reconciled with…everyone else. Those exist and need to be called to account. The problem is, the right has mainstreamed the cranks and meanies. They have allowed those who harbor nothing but hate to drive their political machine. They continue to support a man who, just yesterday, released a statement full of contempt for a man he deems his “enemy.” So this is not a “both-Sides” issue, one party is actively attacking and has a craving for the blood of the other. The right is actively driving us further into division, but it is also actively driving itself into further division. If the Leader sets the mood, then the mood is dramatically dour. The Right has also dragged Christ into the mix, trying to make Him the true baron of their cause, trying to baptize history into Him to make themselves clean and legitimize their bloodlust. The Great Divorce, to these is a coming apocalypse where everyone who disagrees with them is thrown into the mass graves of history.

This seems drastic and even ugly, but that is what we are watching play out before us, demonstrated in the random person who reportedly asked: “We have all the guns, when do we start shooting?” The temperature has not gone down, it has continued to rise and somehow it has continued to rise without a major clash since January 6th 2021. To regain that common ground then, there must be repentance, full and complete repentance of all the attitudes that have brought us to this point, be it fear, racism, anti-immigrant stances etc. There has to be repentance before there can be reconciliation, there has to be a humbling, or history will show us humbled regardless by our own hubris and inability to see one another as people made in the image of God.

Interestingly enough, those who claim that the other side is “Stealing their nation” or “Replacing us” are going to see the outcome they most fear because of their actions and hatred of the other. Like a Church who has fought with each other and its pastors for decades, in the name of preserving the church, will eventually see that church close its doors for good because of that fighting. So our nation will be lost because of the fighting and hatred of the other so present and the constant moving further and further away from one another. Because it appears we are headed for the worst possible outcome and if that day comes, may God save us all.