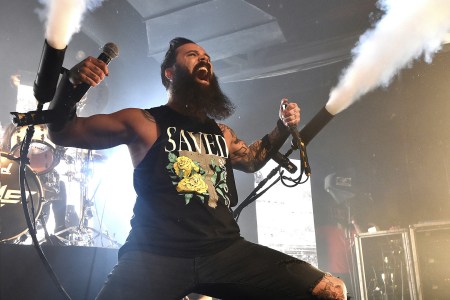 Bands like Skillet and Seventh Day Slumber have thrived in an industry that has continued to seek relevancy through increasing irrelevance.

10 years ago Jars of Clay founding member Matt Bronlewee and his fellow producer Charlie Peacock wrote warning us of the irrelevance of Contemporary Christian Music. They’re arguments went something like this: “Christian Music has failed to address the needs of its listeners and it has failed to offer any substantive hope in the face of increasing hopelessness.” History has shown us they were right, as CCM has entered a perpetual praise craze of safe music fueled largely by Bethel and Hillsong. The songs might make you feel good, but as Ryan Clark of Demon Hunter once said: “They’re little more than artificial light.” That doesn’t mean that there are not good artists out there doing good work, Andrew Peterson, Keith and Krystin Getty come to mind here, but many of the once big name bands have either left the industry (Jars of Clay, Third Day) or tagged on with other popular artists and become like them to continue to make the big bucks (Casting Crowns).

Or bands have used their platforms for incredibly unchristian and even destructive purposes. Take a look at Seventh Day Slumber, formerly one of the biggest names in Christian Rock, as they post screed after screed on their facebook that sounds like it comes from a far-right 4Chan post. Then look at the comments, see how their lead singer is actively involved in tearing down and even silencing anyone who disagrees with him. It is similar to what we have seen for years from Joshua Feuerstien, in fact, sometimes the post are almost identical. They’re culture war rhetoric and cruelty has certainly turned some away from Christ. Which is unfortunate because the band once had a strong gospel-centered message that included freedom for the oppressed and comfort for the afflicted.

All of this brings me to John Cooper of the band Skillet, whose new album “Dominion” we reviewed here two weeks ago. Some will recall that Cooper first found a platform outside music on the Alisa Childers Podcast where he called out “Weak, woke pastors” in a way that made Theobro’s blush, but he most recently made headlines by calling for a “War on Christian Deconstruction” from the stage at Winter Jam which the band headlines every few years. Cooper joins Childers and Matt Chandler as personalities who have now gone after deconstruction. Childers blamed a lack of discipleship in the church (See Deconstructing the Tale of Rhett and Link) and Cooper blames celebrities like Michael Gungor and Rhett and Link, who “lead young people astray” making them “victims” of a lie. This parallel’s Matt Chandler’s comment that Deconstruction has been made: “Sexy” or has become a trend.

I will concede Cooper’s point, that there is a danger in those like Josh Harris with a high public profile have public meltdowns of their faith and even trying to profit off it (which is what Harris did). But I disagree that danger is so great that we need an all-out war where we “Cancel” those celebrities and keep our children from listening to them. I watched Jeff Gordon in the 90’s and 2000’s go through a divorce and read about his deconstruction journey in his biography and it has not destroyed my faith in God. I myself have gone through intense deconstruction and have come out a much stronger Christian than I was before. Perhaps what needs to happen is a grace-filled conversation about why people left the faith and maybe a conversation with those who have stayed, not an all-out war.

Interestingly enough, Cooper never asks the question: What are people deconstructing from? Like the Anti-CRT who know nothing about CRT, or the Anti-Anti-Christian Nationalism crowd (of which we can now include Childers) Cooper is unable to define the phenomenon with which he takes issue, nor does he seem to understand the reasons why this is happening in the first place. As someone responded to Matt Chandler on Twitter: “Deconstruction is a very painful process, there is nothing sexy about it.” When someone deconstructs they stand to lose almost everything they know to be true and that is not just a belief system, that can mean family and friends and relationships as well. It puts strain on marriages and on often already strained family systems. Yes, there is a chance that someone will leave the faith altogether, but there is also a chance they will become a much deeper, better formed, fully committed Christian.

It is entirely possible that not all of these people were believers in the first place. At one point one of the highest grossing bands in music was Third Day, so the industry had money and that money drew a lot of people and now there are bands that are going where the money is. Skillet found a niche as a crossover band, I’ve already mentioned Casting Crown teaming up with Hillsong. Not that I want to cast doubt on the faith of Mark Hall or Mac Powell or even Michael Gungor, my point is there was a lot of money in CCM and Christian Rock at one time and that can be blessing to the genuine artist or an attraction to a non-believer who can play and look the part. And if people were converted to a moral construct like much of American Evangelicalism, then they were never truly baptized into Christ, then that needed to happen to even give them a chance to reconstruct into the historic Christian Faith. But all of this is a very painful process, it causes us to deal with very difficult truths and the feeling that we have been lied to and intentionally misled.

This all brings me back to the bigger issue of Christian Music chasing relevancy through greater irrelevance. Cooper has an invested interest in stopping deconstruction as he sees it because it can cut into record sales. Not that I think Cooper is greedy, but that he sees this as a threat to hi livelihood, especially as other Christian Rock bands like Twenty-One Pilots find massive success on secular labels. Not that Skillet has to worry about their label being defunded, they’re signed to Atlantic Records which is owned by one of the big studios. My point is there is no need to engage in the type of teaching and speech Cooper has actively been engaging in, but to stay relevant to his fan base, he feels like he must. It keeps him in the news and keeps him getting invited back on Childers Podcast and The Riot. Even if what he is saying turns off the younger crowd of Christians like Christian Music has done over and over again for more than a decade. Again, that is not to say that Christian Music does not have bands doing relevant work, Disciple has had amazing songs out addressing mental health, let’s not forget Five Iron Frenzy’s “Until This Shakes Apart” from January 2021. NF has taken on the emotional fall out of being a kid who lost a parent to Opiate addiction, Andrew Peterson has put some of the deepest Anglican Theology into song form for the masses and writing laments that address the death of image bearers at the hands of police. I hope more bands can look at what these artists are doing and decide to copy them, other than Disciple, there is little money in truth telling, in being a prophetic voice, but there is an audience that is desperate for something real, not performative, not partisan and not theologically questionable.

In short, the next generation of Christians is listening to music that says something relevant and even prophetic and they’re supporting artists who write that kind of Christian Music. Hopefully this trend continues, and hopefully Cooper and others repent of their short sightedness, see the harm these comments are doing to their own fans, and find a way to be part of the solution.

But this all comes back to Discipleship, not apologetics, because before one can defend the faith, they must know the faith. They must know it in its ancient form, not in its current American state. In short, they need to be discipled through a deep process of catechesis and spiritual formation that teaches them exactly what Christians believe and have always believed. This kind of discipleship would teach Cooper that Christians are usually “woke” (to use his term) that is, aware of oppression and seek to bring freedom to the oppressed and “weak” relying on Christ for power and strength, not ourselves. That instead of fighting a war against people who are deconstructing, we should show them the same grace Christ showed us and lovingly, patiently come alongside them and listen to their story. We may find we have a lot in common and long have asked the same questions.

In closing, I want to ask you a question: How many people who are going through the painful process of Deconstruction have been pushed further away because of Cooper and others reactions to deconstruction? How many have reconstructed into another worldview outside of Christianity because of the type of mocking Cooper did on stage at Winter Jam? The answer is too many because even if the number is one, that is one too many. We need to do better, not just Cooper, but me and you as well.